Examining the importance and influence of financial market companies is one of the main issues in the field of financial management because sometimes the collapse of a stock exchange company can affect an entire financial market. One systematic way to analyze the significance and impacts of companies is to use complex networks based on Interaction Graphs (IGs). There are different methods for quantifying the edge weight in an IG. In this method, the graph vertices represent the stock exchange companies that are connected by weighted edges (corresponding to the extent to which they relate to each other). In this paper, using the GARCH model (1,1) and the Clayton copula, we obtained the lower tail dependence interaction network of the first 52 companies of the Tehran Stock Exchange in terms of average market value, between June 2017 and October 2020. Then, based on the minimum spanning tree of the interaction network, we divided the companies into different communities. Using this classification, it was observed that the companies of the first group (Food Industry) and the second group (Oil Refinery) have the greatest impact on other companies. We also calculated the central indexes of the minimum spanning tree for each company. According to the results, the companies of the third group (Steel) have the highest average in the central indicators.

Examining the importance and influence of financial market companies is one of the main issues in the field of financial management. Because sometimes the collapse of a stock exchange company can affect an entire financial market. An example is the collapse of Lehman Brothers Holding, which eventually led to the 2008 global financial crisis. One systematic way to analyze the significance and impacts of companies is to use complex networks based on Interaction Graphs (IGs) (Yang et al., 2020). In this method, the graph vertices represent the stock exchange companies that are connected by weighted edges (corresponding to the extent to which they relate to each other). Converting an IG to a tree in which loops have been removed reduces the complexity of the problem and simplifies system analysis. In this study, we used the Minimum Spanning Tree (MST) to analyze the results.

There are different methods for quantifying the edge weight in an IG. Among these methods, we can mention the Pearson Correlation (PerC) coefficient (Patro et al., 2013; Wiliński et al., 2013) and, Transfer Entropy (TE) (Ardalankia et al., 2020; Kwon & Yang, 2008; Osoolian & Koushki, 2020). Here we use Lower Tail Dependence (LTD) to measure the edge weight in the IG, which is a measure of the coordinated behavior of companies in negative returns (Wang & Xie, 2016). This quantity can be used in portfolio risk management. To calculate LTD, we need models through which we can obtain the marginal and joint Probability Distribution Functions (PDFs) of the returns of companies. Due to the fat-tailed behavior of the return PDF in financial markets (Chakraborti et al., 2011), we have used the GARCH(1,1) model to calculate the marginal PDFs (Lee & Hansen, 1994). To obtain joint PFDs we used the Clayton copula (Wen et al., 2019).

The structure of the present article is as follows: First, we briefly review using IGs in financial market analysis. Next, we have introduced the quantities and models used. Then, the results of the research are presented. And finally, we discuss and conclude the results.

The idea of using IGs in financial market analysis goes back to Mantegna. Using PerC-based IG, he was able to obtain a hierarchical structure for the companies under study. In other words, he was able to use the IG to divide companies into groups that had the same field of activity (Mantegna, 1999).

Bonanno et al. investigated the topological structure of the MST in financial markets. They have shown that for real markets, MST has a structure that cannot be reconstructed from random data, even in the first approximation (Bonanno et al., 2003).

The statistical population of this study is the 100 large companies of the Tehran Stock Exchange based on the average market value (https://www.fipiran.ir/). Among them, companies that had more than 3 months of interruption in daily stock exchange transactions were eliminated. Finally, the remaining 52 companies were selected as statistical sample companies. For these companies, the LTD-based IG was drawn. We used the Clayton copula and the GARCH(1,1) model to calculate the LTD. To obtain the parameters of the Clayton copula and the GARCH(1,1) model, we used the Maximum Likelihood Estimation (MLE) method. From the IG, we obtained the MST for simplicity in analyzing the results. Using MST, we divided the studied companies into different groups in terms of dependency. Finally, we calculated the central indexes associated with the MST.

where  is the inverse of the Cumulative Distribution Function (CDF) .

Similarly, the Upper Tail Dependence (UTL)  is defined as follows:

The joint CDF of several continuously uniform random variables on the set [0,1] is called a Copula. In other words, if  is a random vector with , then the copula

is defined as follows:

See Appendix 1 for details on Copula.

In economics, the Generalized Auto-Regressive Conditional Heteroskedasticity (GARCH) is a statistical model for time series data. In this model, the time series of the return of a financial institution  is given as follows:

where  (random variable with normal distribution with mean zero and variance one),  is the time-dependent variance, and  are the free parameters of the model. These parameters can be estimated using the real value of  in a time series based on the MLE method.

As can be seen, in this model the variance of the random variable , itself is also a random variable. It can be shown that in the GARCH(1,1) model the mean value of variance is equal to . In obtaining the time series of variance, we use this value as the starting point of variance. In other words, we put .

The degree of each vertice or node is equal to the number of edges connected to that node. The degree of node  is defined as follows:

The strength of node  is defined as follows:

where is the LTD of nodes  and .

where  is the distance of the shortest path from node  to node .

Then, using the GARCH(1,1) model (Eq.9 and Eq.10), we calculated the time series of variance through the following recursive relation:

In this model, is a random variable with a normal distribution function with a mean of zero and a variance of , in other words

We used the MLE method to estimate the parameters }. The best estimates for the value of these parameters using the  time series are values that maximize the following likelihood function:

The values obtained for these parameters for each company are given in See Appendix 2 for company names. Error! Reference source not found.

where  and  are the normal CDF for the return of companies  and , respectively, and are obtained as follows:

where erf is the error function.

After obtaining the parameter  for each pair of companies, we obtained their LTD using Eq.8. The mean, variance, maximum, and, minimum of LTDs are given in Table 1.

To draw the MST, we first converted the LTD matrix to the distance matrix as follows:

Figure 1 shows this matrix. The corresponding MST is depicted in Figure 2.

Using the FindGraphCommunities command in Mathematica software, the present companies were divided into different groups on MST. These groups are listed in Table 2 along with the mean value of the LTD of each group.

Considering that only the food companies in the list of 52 companies i.e. Glucosan and Pars Minoo Industrial Co. were in the first group, we named this group Food Industry. A similar argument is made about the Pharmacy group. The nomination of other groups is selected according to the number of dominant companies in that group that have the same field of activity.

The assortativity coefficient of grouping was 0.897. This value indicates that the grouping performed has a high-resolution quality.

Table 4: The first 5 companies in the central indexes

In the study, the impact of the selected 52 companies from the Tehran Stock Exchange (based on market value) on each other in the period from June 2017 to October 2020 was examined. The mathematical tool used in this study was the lower tail dependence of companies. This quantity was calculated using the GARCH(1,1) model and the Clayton copula. By obtaining the lower tail dependence of the companies, their interaction graph was obtained. By drawing the minimum spanning tree from the interaction graph, the existing companies were divided into different groups based on their impacts on each other. The assortativity coefficient of the minimum spanning tree in this division was 0.897, which indicates the appropriate resolution of the groups. According to the results, it can be seen that the companies in the first (Food Industry) and second (Oil Refinery) groups have the greatest impact on other companies in the period under review. Also, companies in the sixth (Pharmacy) and seventh (Investment) groups have the least impact on other groups. By calculating the central indexes, it was observed that the third group (Steel) had the highest average in three indexes (node degree, betweenness centrality, and, closeness centrality) of the four studied indexes. Also, Shazand Petrochemical Co., Bandar Abbas Oil Refinery, and, Iran Khodro Investment Development Co. were among the first companies in the central indexes.

Based on the above results, the policy implications of this article are as follows:

The authors declared no potential conflicts of interest concerning the research, authorship and, or publication of this article.

The authors received no financial support for the research, authorship and, or publication of this article. 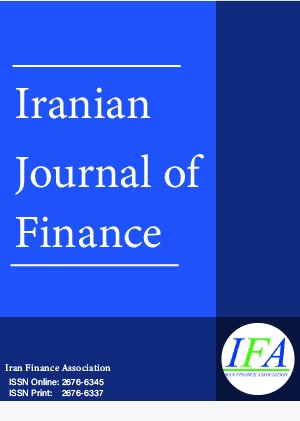